The first of what I hope to be a regular feature of updates from the local Neighbourhood Police Team appeared in the last edition – I would like to take a moment to say thanks to the team at The Newton News for giving ourselves the opportunity to give a flavour of what we’re about and what’s going on in the local community. For those who wish to know the ‘author of these features I’m the local Neighbourhood Inspector – Mark Edwards.
I thought for this festive feature I would start by highlighting just what it is that a Neighbourhood Policing Team does for those who may not know.
How to simplify it then? Within Durham Constabulary we are split across a wide range of commands. You have CID and our variety of Crime Teams (no introductions necessary, that’s the juicy stuff!), there’s Safeguarding Officers who deal with those more sensitive issues such as domestic abuse and child and adult vulnerability issues, there’s the Road Policing Unit (they’re the A-listers – you might know them as the Interceptors!) – think flash cars, our Prisoner Handling Teams who deal with arrested persons. Response Officers are the 24/7 cops who respond to immediate and priority graded incidents, and amongst others there’s the N.P.T.
NPT’s consist of Police Constables and Community Support Officers – we work closely with partner agencies such as local authority anti-social behaviour Teams, private and social housing providers, other emergency services, local community groups, residents and retailers (the list is endless) and through these liaisons we adopt multi-agency problem solving approaches to address those issues impacting upon the quality of life of our communities. These are usually the more protracted matters – anti-social behaviour ‘hotspots’, ongoing neighbourly disputes, crime spikes and trends etc etc. Unlike the Response Teams we have the luxury of operating in ‘slow time’. You may have heard of a little thing called PACT (Police and Communities Together) – these are the forums in which many of us can get together and discuss local issues whilst setting local priorities in the process that – through a combined approach, we can all work towards tackling.

Crime Prevention:- In the last edition I highlighted a number of crime prevention tips. Unfortunately I wish to reiterate one of those key messages. Here in Newton Aycliffe we have continued receiving reports of thefts from vehicles, particularly ones that have been left insecure. Between 12 midday on Monday 14th December and 9 am on Tuesday 15th December 2015 a purse was taken from the passenger seat of a VW Transporter vehicle that was parked on a driveway in Wynyard Court. Entry into the car was simply facilitated by the person responsible trying the door handle. I cannot stress enough the importance of locking your vehicles and not leaving property a) within and b) on display for all to see. This is what we call a preventable crime.

#onepunchcankill :- As the festive season descends upon us many will take to the pubs/clubs to celebrate. Can I ask that people take extra care when they’re out in relation to how much they drink and how they interact with others? Unfortunately, we know only too well within the Emergency Services that alcohol and violence do not mix well together. If you’re out socialising and someone bumps into you accidentally – think nothing of it. It’s fine. Likewise, if you accidentally bump into someone and they react negatively – walk away. Be the better person. DON’T REACT. Walk away. Recognise warning signs. These are the principles of the ‘One Punch’ education campaign – set up in the wake of an alcohol fuelled death where a one punch assault resulted in a fatality.
So, to everyone out there – and on behalf of the local Constabulary here in Newton Aycliffe, I wish you all a very Merry Christmas and all the best for 2016. Enjoy and be safe!
Mark J Edwards
Neighbourhood Inspector 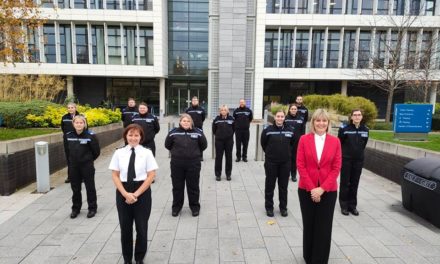