The Town of Great Aycliffe is situated 5 miles north of Darlington on the west side of the River Skerne, and is traversed both by the A1 motorway (the Great North Road) and the A167 trunk road.

The Newcastle to London main railway line runs alongside  Aycliffe Village and the Town Railway Station  has a branch rail route between Darlington and Bishop Auckland.

The Town has developed greatly in recent years and Great Aycliffe includes the village of Aycliffe, the new town of Newton Aycliffe and, between the two, the large Aycliffe Business Park that has developed to the second largest in the North with over 300 businesses employing approximately 10,000 workers. 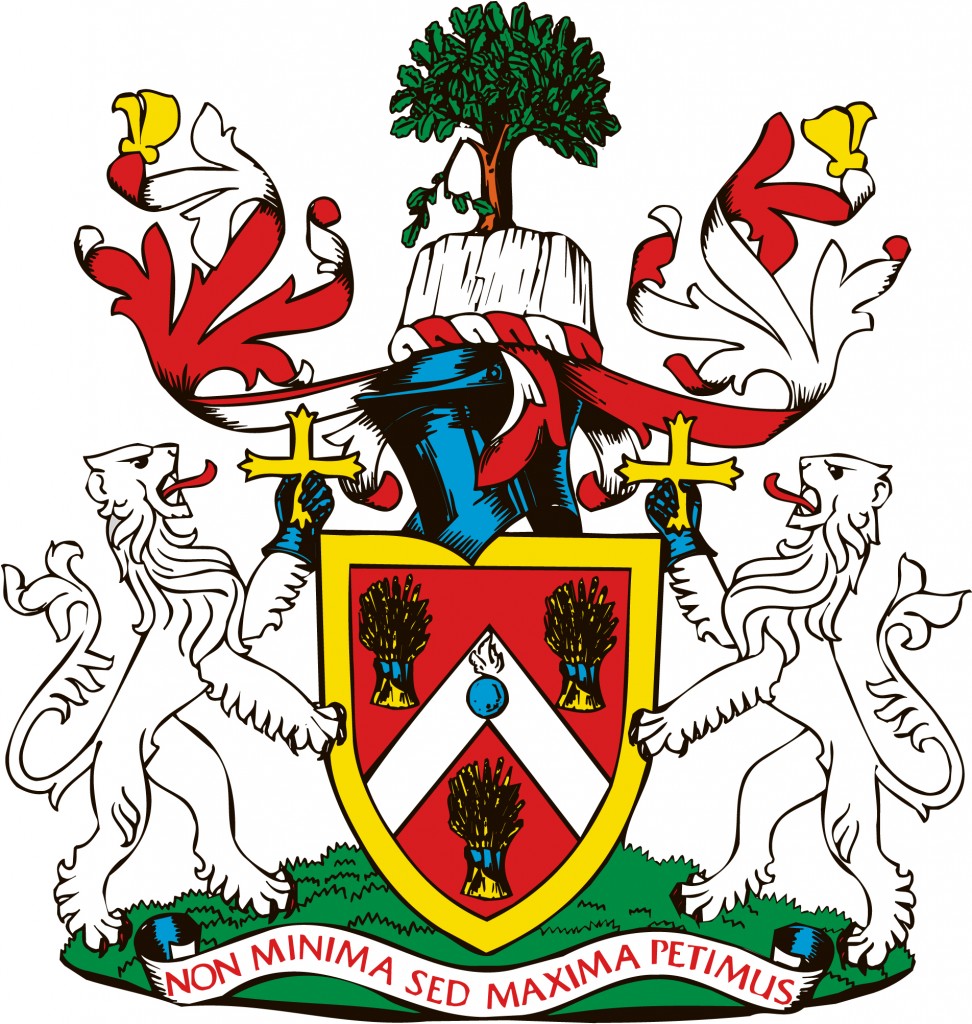 “Not the least, but the greatest, we seek”.

The Heraldic Shield  has a background of red surrounded by a border in “or” representing the boundaries of the designated site of the new town of Newton Aycliffe. The Chevron across the shield is in “argent” and is an allusion to the bridge over St. Cuthberts Way linking the town with Aycliffe Business Park.

The sheaves of corn forming the garbs in the shield are taken from the Arms of the Eden Family, of whose estate the site of the new town formed a part, and the hand grenade on the chevron represents the Royal Ordnance Factory out of which the Business Park was converted. The supporters in “argent” are the Lions Rampant in the Arms of the See of Durham, differenced with mail gauntlets in allusion to the military activities of the Bishops of Durham and holding Crosses Pattonce in allusion to the old form of the Arms of the See. The Crest consists of an oak tree on a limestone cliff surmounting a helm. The oak tree is a reference to the forests which formerly covered this part of the country from which was taken the Saxon name “acle” meaning “oak leaf”, from which the name of Aycliffe was derived. One of the branches of the oak tree is broken and bent down to indicate the disappearance from the area of its oak forests and with a lesser branch the letter “A”, thus forming a rebus on Aycliffe.

The grant of Arms to the Aycliffe Development Corporation was made by the College of Heralds in October, 1956, and on the dissolution of ADC was transferred to the Town Council.