A popular children’s play park has closed to allow for a full refurbishment, thanks to funding from its Area Action Partnership (AAP).

The park will be temporarily closed to members of the public for at least three weeks until works are completed.

The refurbishment will see the old play area removed and replaced with modern, low-maintenance equipment that meets children and young people’s needs.

Children and young people up to the age of 12 will be able to enjoy the new accessible equipment which has been designed with a variety of features for them to play and explore.

The equipment will have a full range of activities, such as multi-use units to encourage children to develop a variety of motor and coordination skills such as climbing and balancing.

Further play features will also be included such as roundabouts and rocking equipment, as well as a learn-to-ride area where the former under-5s play area was situated.

As a central main attraction for residents and visitors in the area, the vision for the park is to improve the quality of equipment to be available for all users.

The refurbishment has been possible through grants from the neighbourhood budgets of current elected members Cllr Andrea Patterson, Cllr Anne Reed and Cllr Patricia Jopling, as well as £6,826 from the It’s UP 2 U £500k fund.

Funding has also previously been allocated to the project through Groundwork North East by Cllr Patterson, former councillors Eddie Tomlinson and Maureen Stanton, and a contribution from Section 106 funding.

Sandy Denney, AAP coordinator, said: “I am delighted that, thanks to councillors’ neighbourhood budgets and additional funding, we have been able to award this money to refurbish Glenholme Park.

“It is important that children and young people have somewhere safe to play and I hope this new accessible play area will provide a safe space for children and families to enjoy.” 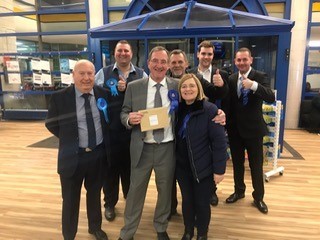 Proud to be Your MP