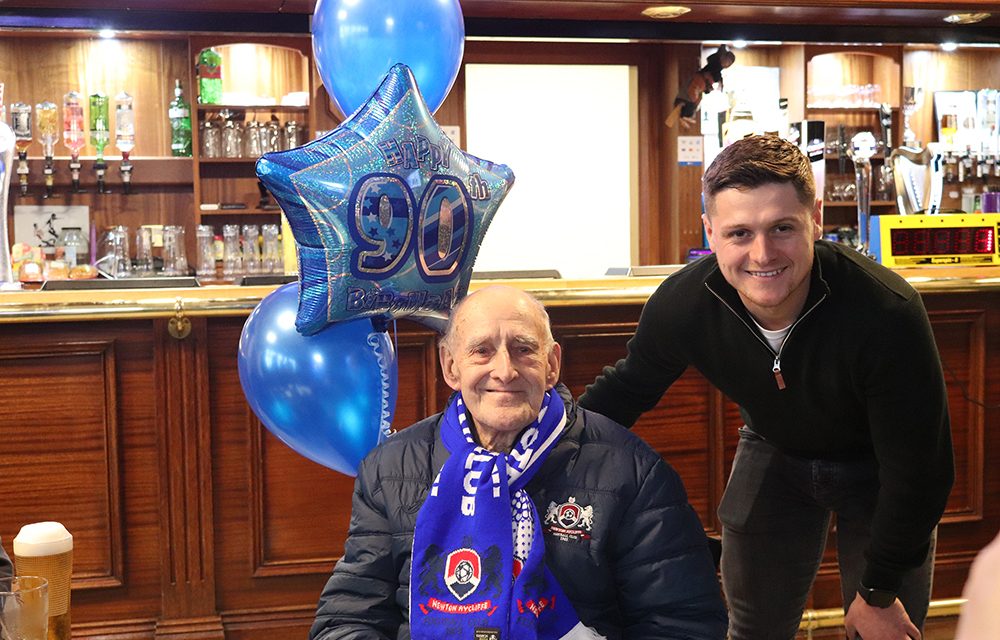 Newton Aycliffe FC’s oldest supporter, Charlie Bussey, celebrated his 90th birthday this week with a surprise presentation from the Club. Originally from Middlestone Moor Charlie has now been a Newtonian for over 60 years & during that time has become a dedicated follower of the town’s football team. He still attends most games, home and away.

Last Saturday Charlie’s family organised a surprise for him with a visit to Newton Aycliffe Sports Club to meet the players and committee. Club Captain Aaron Brown (pictured with Charlie) presented him with an engraved plaque marking the occasion, with the players applauding the nonegenarian.

Charlie, wearing his Aycliffe coat, and new scarf, was delighted with the reception and reflected on many years of watching his favourite team. He was accompanied by his sons Michael and David, along with grandson Matthew.

The Club had planned to make Charile’s presentation on the pitch at the Beaumont Landscapes Stadium. However, the game against Seaham Red Star fell victim to Storm Dennis. It wasn’t alone. The only 3 games played in the Ebac Northern League last Saturday were on artificial pitches. The rest fell victim to waterlogged (or in the case of Tow Law, snow covered) pitches.

The Seaham game has been rearranged for Tuesday 24th March with a 7:45pm kick off. Aycliffe now hit the road for games at Whitley Bay, Newcastle Benfield and West Auckland. The next home game is on Tuesday 3rd March (KO 7.45pm) when second placed Hebburn Town will be the visitors. Admission is £6 adults, £4 concessions with accompanied under 12s free.