Honoured for her war service – on her 100th birthday! 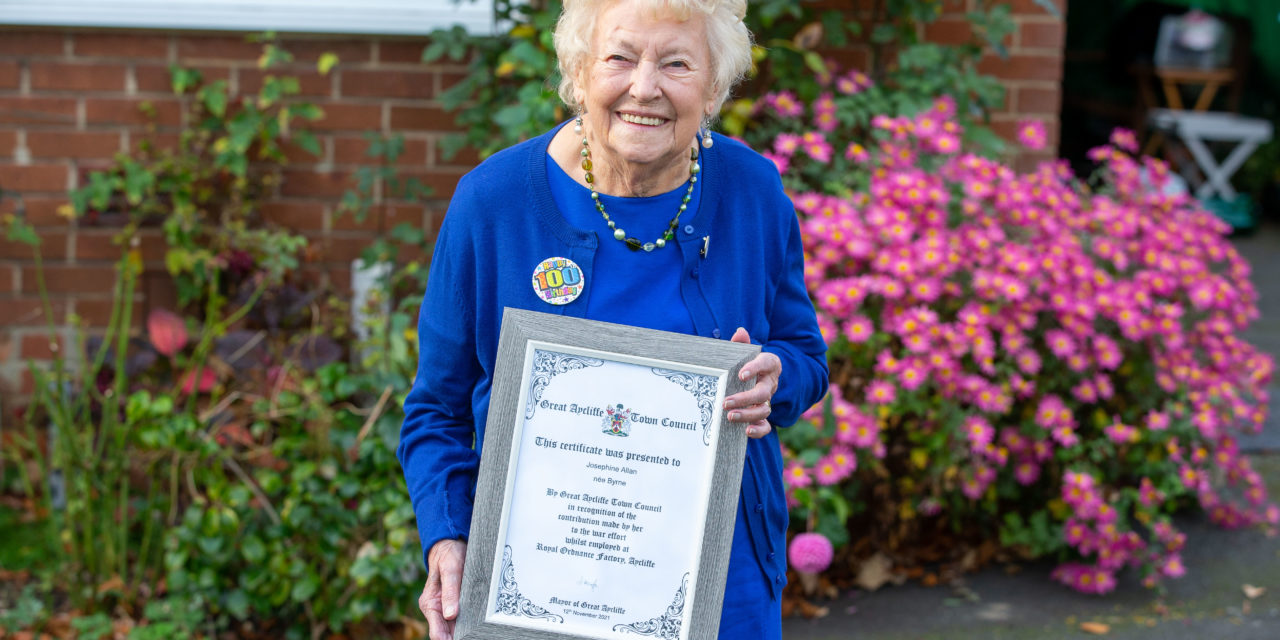 Jo Allan, who has lived in Middlesbrough most of her life, was one of thousands of female workers who supported the war efforts at a huge munitions factory in Aycliffe, near Darlington.

The women who worked there carrying out vital work were famously known as the Aycliffe Angels.

Jo’s job, after a long journey taking a bus and two trains from her home in Linthorpe to Heighington, close to Aycliffe, was the important work of checking bullets for faults.

During a small family gathering on her 100th birthday, Middlesbrough mayor Andy Preston called in to make a surprise presentation on behalf of Greater Aycliffe Council.

The mayor presented Jo with a certificate and brooch officially recognising her as an Aycliffe Angel and thanking her for her contribution to the victory in Europe.

He said: “These women were completely uncelebrated and unrecognised for too long but this is being put right now because we should tell the story about the efforts people like Jo made supporting the brave soldiers who were doing the fighting.

“I’m sure the incredible work Jo and others did saved many lives.

“It’s time to acknowledge the efforts of all the Aycliffe Angels during the war that helped change the course of European history for the better.”

Jo had hoped to celebrate her centenary with her 101-strong offspring but, despite a planned party being cancelled due to Covid concerns, she was left feeling very special on her big day.

She received a birthday card from Her Majesty The Queen and another from Middlesbrough mayor Andy Preston, as well as cards and video messages from family members from as far afield as Canada, USA and Australia.

And in another video message, devoted Catholic Jo’s former parish priest at Holy Name of Mary and family friend Fr Paul Farrer – now based in Valladolid, Spain – told how he had dedicated mass at St Peter’s in Rome to the centenarian.

Born on November 18 1921 when George V was the King, David Lloyd George was Prime Minister, the Transporter Bridge was still considered the height of technology, Jo has lived in Middlesbrough for almost all her life, raising a family that grew and grew and grew!

Asked about the secret to a long life, Jo says simply: “There isn’t really a secret but I do think it’s important to have a happy frame of mind and to try not to worry.”

Jo was married to Dave for 61 years. He was well-known for his involvement at the Erimus Club on Cumberland Road, where he was at various times Trustee, Secretary and President. Dave passed away in 2005, aged 82.

Instead of birthday presents, Jo asked friends and family to make donations to Our Hospitals Charity towards the Stroke Unit at James Cook University Hospital, where Dave was cared for before his passing. Around £1,500 has been donated so far.

Their children include no fewer than eight daughters – Pauline, Joan, Judith, Barbara, Mary, Catherine, Susan and Steph – together with sons, Doug, Bernard, Gerard and Dave.

Her oldest child is now aged 77, while her youngest great grandchild is just five months old.

Two years ago, Jo suffered a health scare and the family were told to prepare for the worst. But two years on, she’s still going strong, with her children taking it in turns to stay and care for her at her home in Linthorpe.

The only time she lived away from Middlesbrough was during the war when Dave served as an wireless operator and air gunner at RAF Valley and the recently married couple lived in Anglesey in Wales before a brief spell in Hereford at the end of the war.

Later, as well as raising their large family, Jo found time to work for many years as a product demonstrator in local shops, including Newhouses (now Debenhams) and then as a rent collector and housing officer for Middlesbrough Council.

In her long retirement she has rediscovered a long-lost love for art and, until the outbreak of the pandemic, attended a weekly art class. She was also an active member of Middlesbrough U3A and the Mother’s Union.

Eldest child Pauline said: “Mum has always been the most loving, interesting and energetic mother, always on the go, putting us children first and herself last.

“My earliest memory of her would have been 1947 when I came in from a walk and found Mum in the kitchen with hands and arms covered in red. I was terrified but it turned out she was dying someone’s old curtains for our new house!”

Eldest son Doug paid tribute to his mother and her longevity, saying: “She not only had 12 children but then went back to full-time work until her retirement at 65. Her favourite joke is that she knew what she was doing in bearing so many children – ensuring that she had sufficient carers as she grows old.

“And she often complains that Covid is preventing her from going off on holiday, which is unfair as she might not have many years left!”

Three years ago, daughter Susan helped her produce a book about her amazing life. It’s titled “Just an Ordinary Mother – My Life and Legacy”. All Jo ever wanted to be was ‘an ordinary mother’, but there is no question, she became an ‘extraordinary mother’. 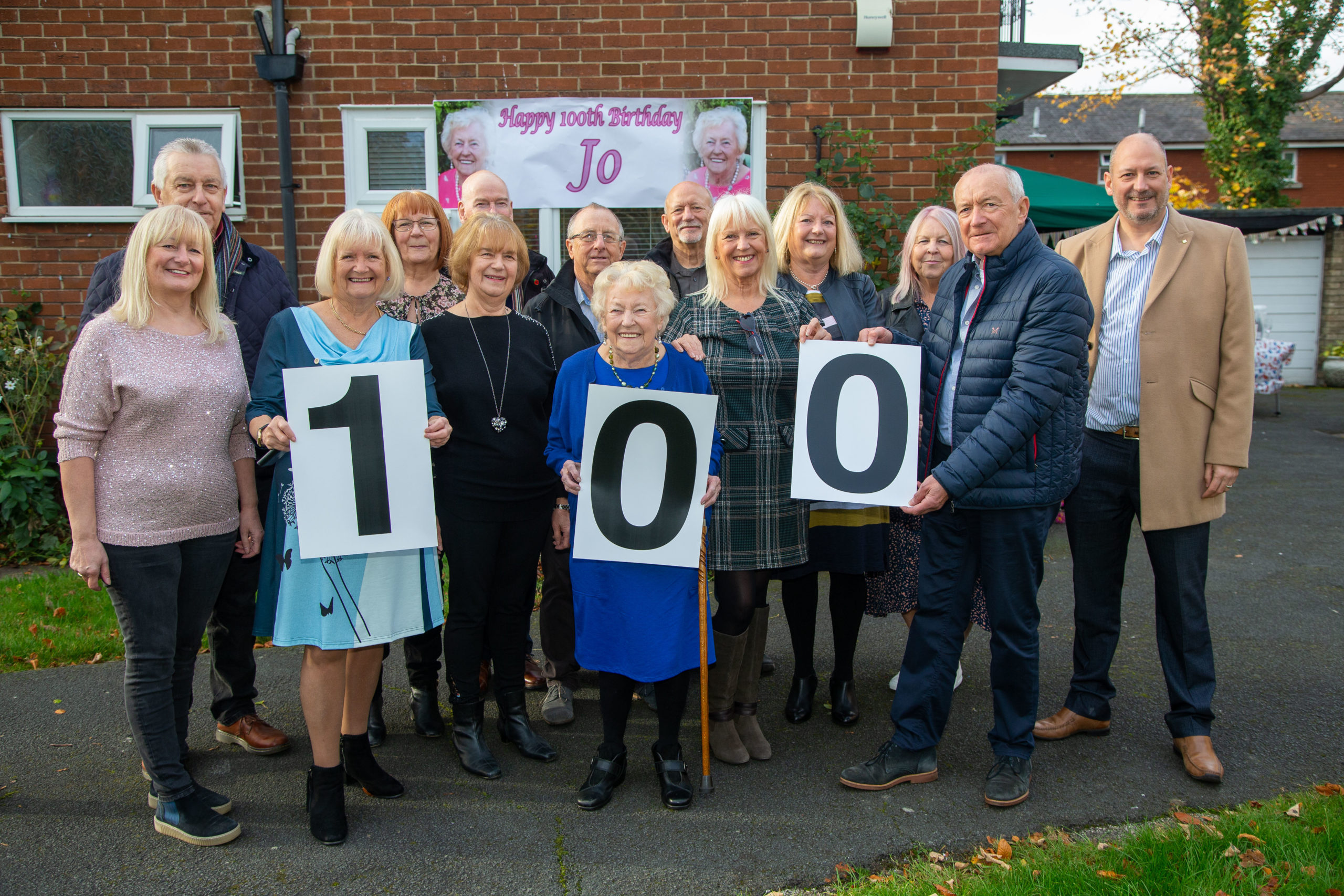 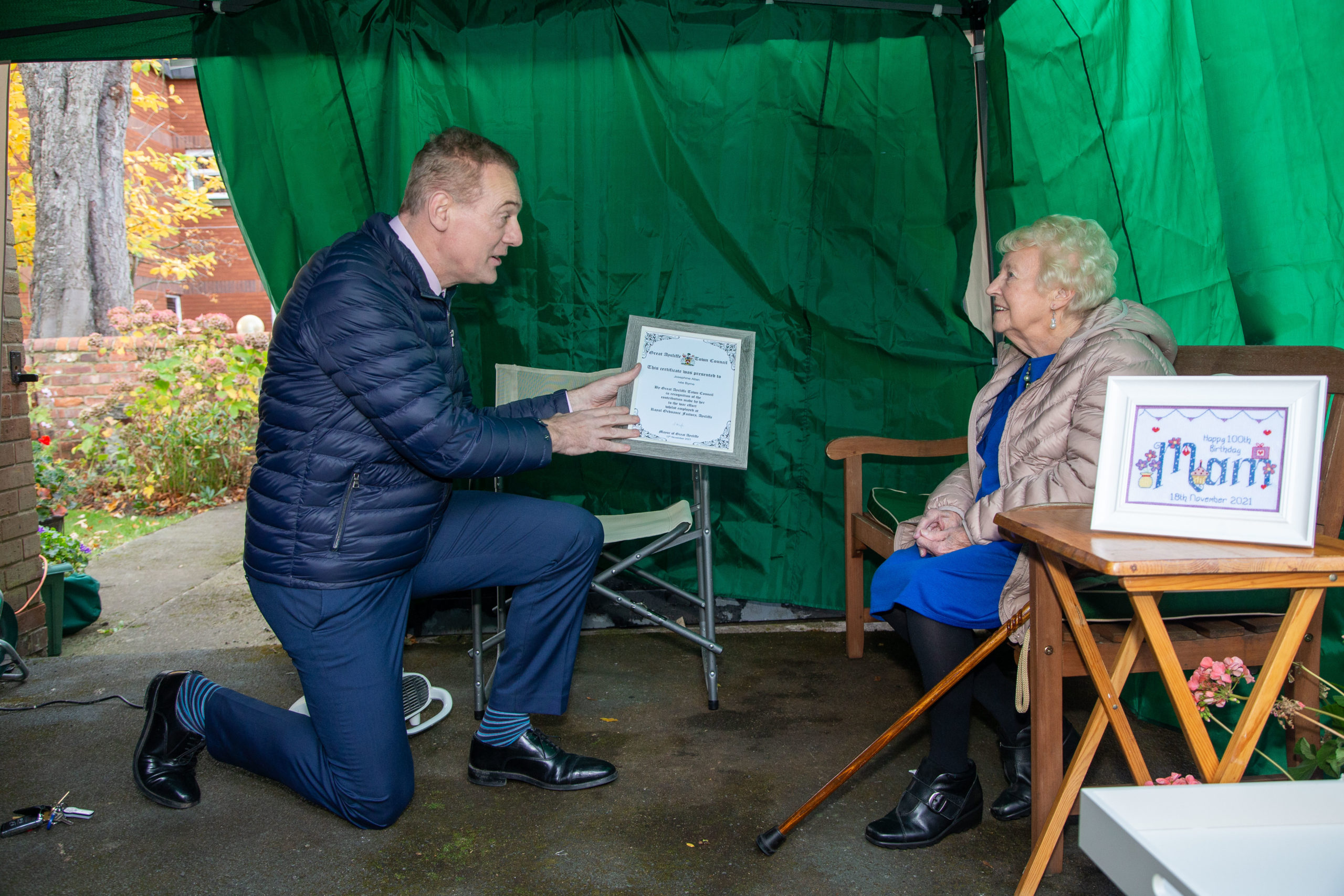 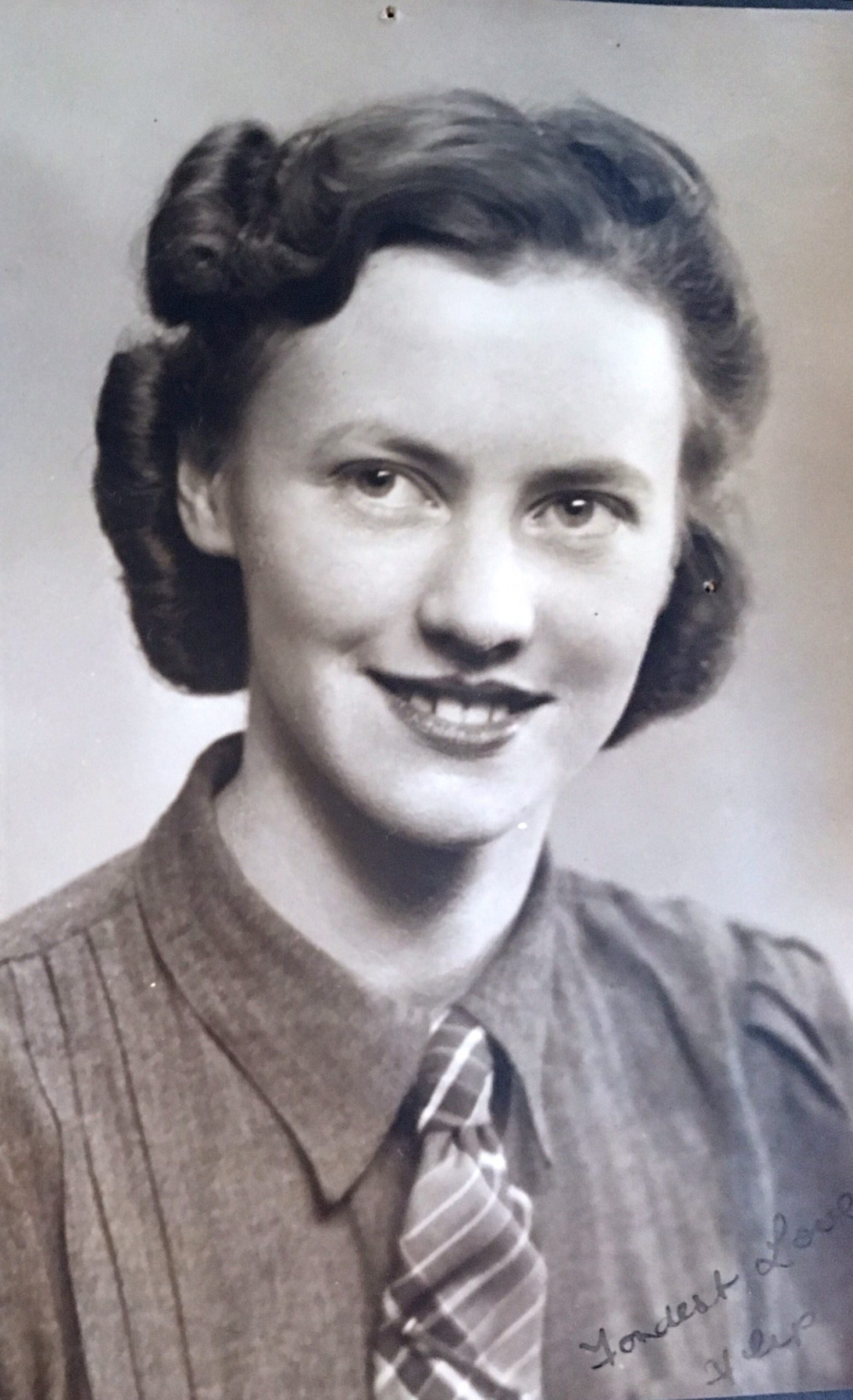 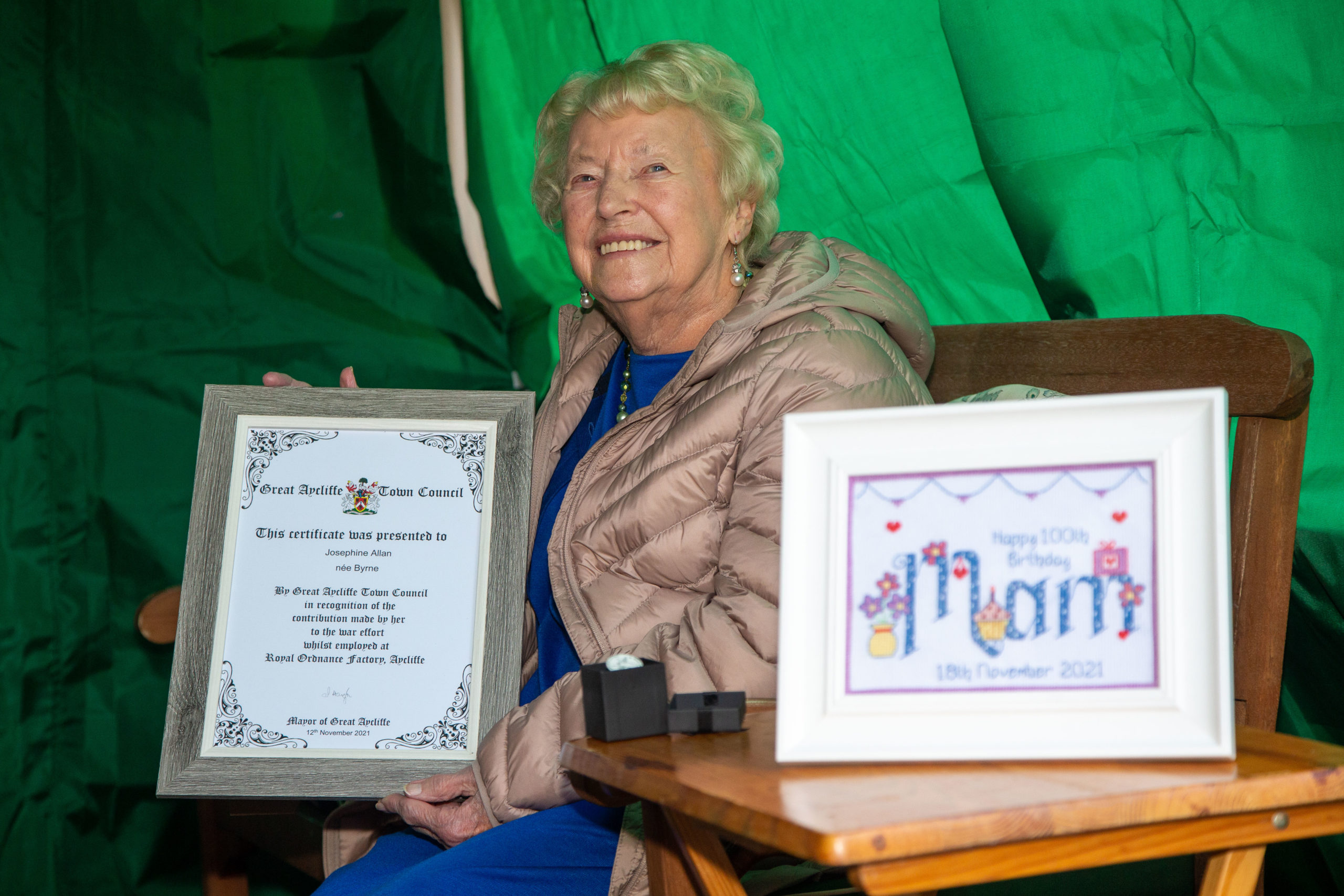 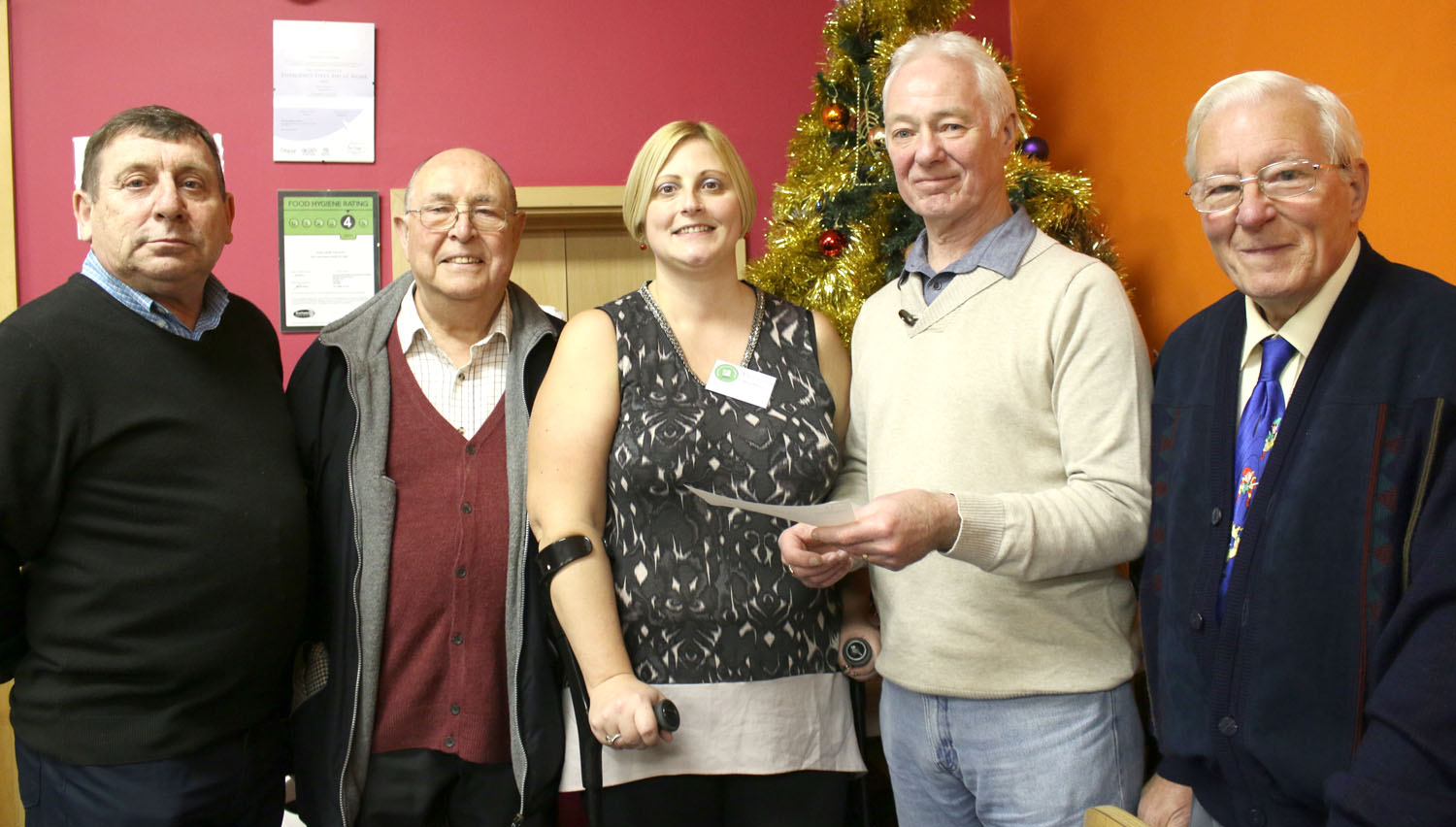 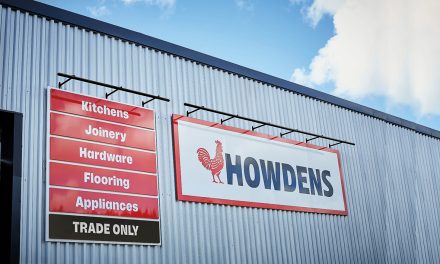 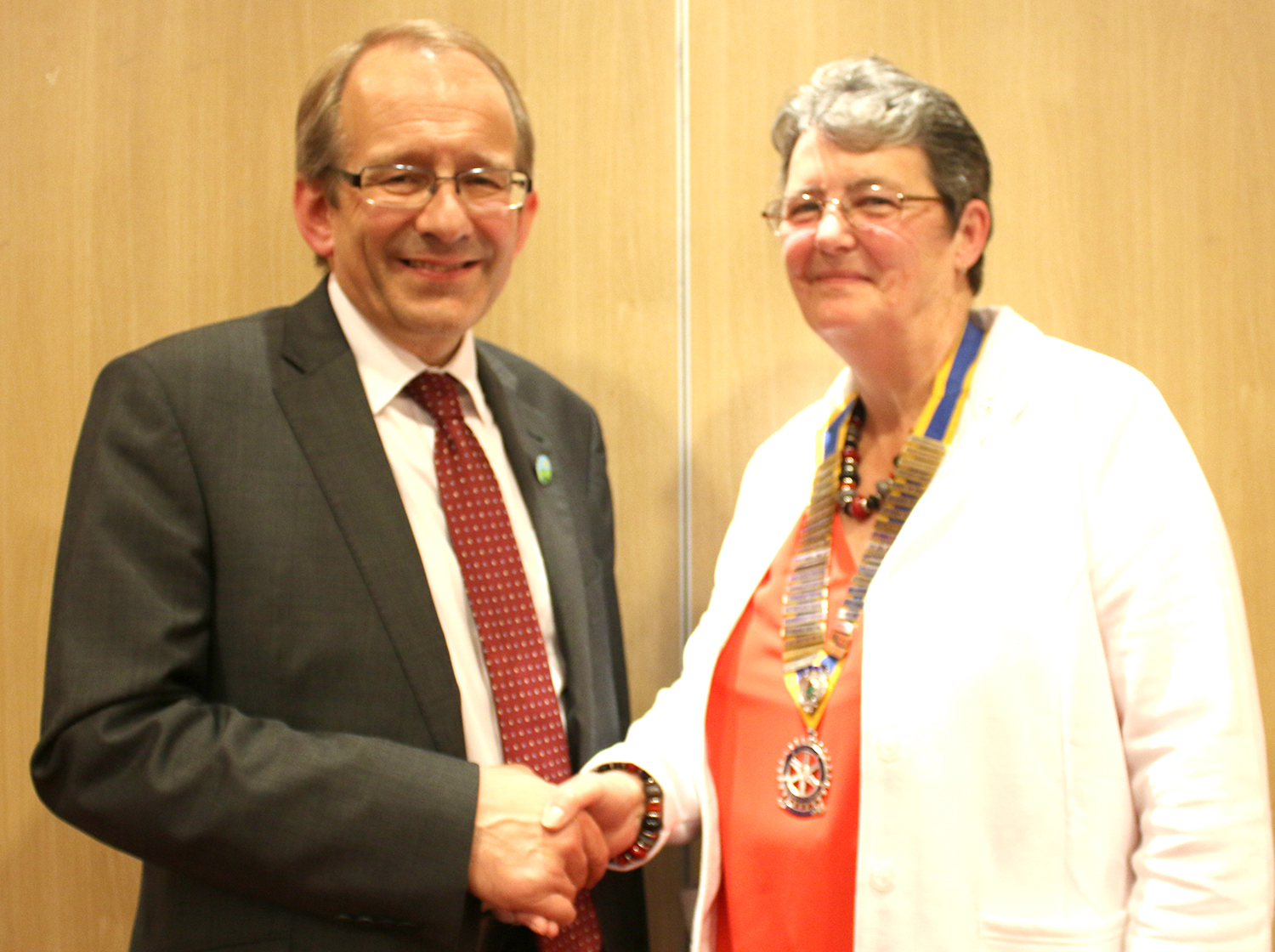 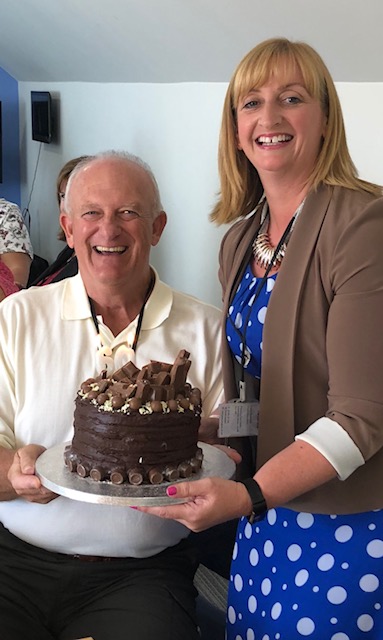