Dear Sir,
A blue plaque honouring the Aycliffe Angels will be unveiled on Saturday 23rd October at ROF59, the site of the former Second World War munition factory in Newton Aycliffe.
We would like to invite people from the local community, many of whom will have connections with the Aycliffe Angels. Invitations have also been sent to all County Councillors for the Great Aycliffe area as well as all Town Councillors and Mr Howell, MP.
By way of a bit of background information, the reason for the female blue plaque nominations was Lyn Gibson, secretary of the Women’s Banner Group (WBG), discovered there were no blue plaques in County Durham dedicated to women. Lyn subsequently organised a hustings event for the WBG to change that at the Durham Miners’ Hall in March 2019. WBG invited members of the public to submit nominations.
Being from a military family myself, I decided to nominate the Aycliffe Angels. All nominations were voted on and the winning three plaques submitted by WBG to DCC were the Aycliffe Angels, Kate Maxey (one of the most decorated nurses in WW1) and Bella Lawson (a passionate pioneer and promoter of Child Welfare Clinics from 1919 until her death in 1968).
There will be three blue plaque events taking place on the same day in County Durham with the Aycliffe Angels event being the first of the day.
The event at ROF59 is scheduled for 10.00am on Saturday 23rd October with a couple of short speeches and an unveiling of the plaque. The plaque will be placed on the outside of the building and ROF59 have agreed to use that space and the area of the Blitz Restaurant for this event. We hope by using that combined space we can ensure as many people who want to attend can attend and in a safe way. We are very grateful to the Finley family for their help with this event.
Tim Dredge 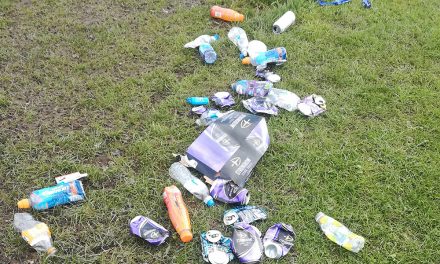 Watch out for Litter Louts